Remember the good ol’ days? Standing in a long line at your local arcade to be the next player to take on Mortal Kombat? It has been a long time since we’ve seen the klassic Mortal Kombat and with the 2011 reboot, we expect it to go uphill from here. After all these years, a kollection of the three klassic Mortal Kombat games is released. Is it still the same game we know and love, or has it sunk to a new low?

Mortal Kombat Arcade Kollection packs the original Mortal Kombat trilogy into one downloadable package – Mortal Kombat, Mortal Kombat II and Ultimate Mortal Kombat III. Mortal Kombat originally wasn’t as deep as it grew to be, so the game is pretty basic. No heavy duty story line, no extra kontent – just plain ol’ ladder fighting. Those expecting more, head back over to the reboot of the series. This should come to no surprise, so expect to simply live out the old arcade days with this title.

While the original Mortal Kombat games are certainly no where near the sights of beauty we’ve seen in the series’ newest release, the original titles can still be looked at without feeling the need to barf in disgust. The character’s details aren’t the greatest, and the “gorey” bits and pieces of the character’s are animated lovely. One thing worth noting is that the game ISN’T a remastered version of the originals, so you will be playing in a small box in standard definition. While this is true, the developers threw in some neat aesthetic changes to spice things up a bit for both the nostalgic fans and those simply looking for a better alternative in terms of graphics.

The Kollection comes with various filters that can change the way the game looks. Some examples of these are a painted scheme that makes the characters look as if they were painted on screen, while the other is Arcade which packs a very close resemblance to the original static-y look of an Arcade cabinet screen. The Kollection also brings a nice screen alternative that arcs the game display to appear as though you are playing on an arcade cabinet. While this doesn’t exactly work with flat screens, it is still pretty neat for the nostalgic players out there.

While the fatalities range from somewhat gruesome to outright boring and ridiculous, it is fun seeing all the klassic fatalities play out on screen. Babalities, Animalities and Friendships are also packaged in the game for a neat twist, and are still funny even after all these years. 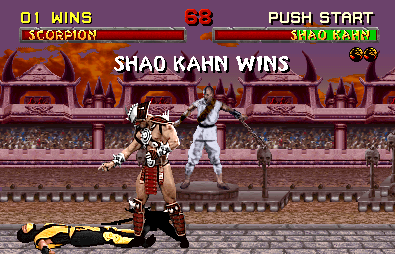 The three originals play out exactly as you remember them. Nothing has changed about the gameplay, and should be familiar to fans of the series. However, this isn’t exactly so great. Compared to the pretty fast paced fighting of the newer titles in the series, the original three were much more slower pace fighters that focused drastically on special moves rather than combo inputs. This can become extremely difficult to deal with, and will only leave players wanting to play Mortal Kombat ’11. In easier terms, the gameplay just hasn’t aged so well.

In terms of delivery, don’t expect too much content out of this kollection. You get pretty much the basics, which is what one would expect for classic arcade ports. Despite that, the kollection does manage to pack in some nice additions such as online multiplayer and leaderboards support. However, the leaderboards are pretty barebones and the multiplayer is essentially broken. For starters, it takes a God-awful long time to actually get into a match, and even when you’re in a match the experience is terrible. The lag when playing online is incredibly severe, and can lead to constant quits from yourself and other players. While these additions are much appreciated, it would be even more appreciated if they worked right.

Prepare for a lot of this...

Another issue with the gameplay turns to the AI. This kollection is meant to be an “arcade perfect” port, so it is understandable why the AI is incredibly difficult. The AI in these three games are cheap, and practically cheat their way to victory. Even on the lowest difficulty, the AI are spewing out constant combos and laying some heavy damaging moves. This is especially true for the sub-bosses and bosses of each title, and all the AI in Mortal Kombat II. In Mortal Kombat II, to be specific, the characters practically cheat, spamming projectile moves and having a sixth sense as to what to expect from the player holding the controller. This being an arcade port, the games were originally meant to rip you off of every quarter you have – but this time we aren’t paying with quarters. We payed a flat fee to have some fun, and the cheap tactics of the AI is not fun. Perhaps a setting that can turn on and off the “arcade perfect” versions? Just a thought. This setting can also enhance another issue I have with the game – fatality time.

The newer Mortal Kombat titles give players a decent amount of time to check out the input code for the fatality and input it. The originals, however, failed to do so. Knowing this, it would have been nice of the developers to add a few more seconds into the fatality timer, so we can check back at the codes in the pause menu and get into position to utilize it. These minor fixes and changes could have crafted a fixed version of the classics we love.

Mortal Kombat Arcade Kollection is purely for the hardcore fans of Mortal Kombat. If you are ready to curse countless times at the game, button mash and spam the hell out of the AI and memorize every combo as a newcomer, be my guest. However, hardcore fans know what to expect and know the blast of the past they had with the game, and their nostalgia meter kicks into overdrive when they play these original titles. However, even with that, their is no excuse for the lackluster new additions added into these classics – namely online play and leaderboards support. All in all, for a cheap price of $9.99, it is worth every penny for the hardcore of the hardcore.